What is Big Six? How does it compare to roulette and slots? 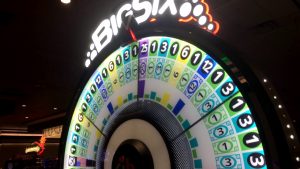 Big Six, also known Big Six Wheel or Wheel of Fortune, is a popular casino game, that draws the crowd. It’s especially popular in Las Vegas, or crazyvegas as I like to call it. It involves a vertical wheel, six feet in diameter, divided into 54 equal segments. Typically, 52 of the 54 segments are marked with numbers representing dollar amounts – usually $1, $2, $5, $10 and $20 – while the remaining two are marked with a joker and a casino logo. Each segment is separated from the next by spokes which, by means of frictional interaction with stationary ‘clapper’, made of leather or rubber, at the top of the wheel, bring the wheel to a halt at the end of each spin.

Fairly obviously, the idea of the game is for players to predict on which, of the six possible segments, the clapper, or stopper, will fall.The payout odds, probabilities and house edge vary slightly from one version of Big Six to another across the globe but, under Las Vegas rules, odds range from even money, or 1/1, for the $1 segment to 40/1 for one of the logo segments. Unsurprisingly, the probability of winning ranges from 44.44% to 1.85% and the house edge – which, at best, is one of the highest to be found in casino games – ranges from 11.11% to 24.07%. To put those figures in perspective, the probability of winning a bet on a joker or logo segment on Big Six is less than that of making three of kind in a hand of poker.

There are obvious parallels to roulette (spinning, numbers), but at the same time it’s also rather surprisingly popular with the slots crowd. Slots – or pokies as they are known in some areas of the world such as New Zealand and Australia – offer the same anticipation of a win, but arguably much more variation with a game Like Big Six. The various pokies machine at online pokies australia and the like, have countless differing themes, prizes and features. Free spins and other such offers are also available when playing online, and so there is often the potential to win with less of a downside to consider.